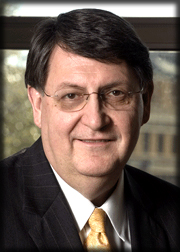 Dr. Ewing was a distinguished professor of mathematics and applied mathematics, and the founding director of the .

Dr. Ewing earned Doctor of Philosophy, Master of Arts, and Bachelor of Arts degrees in mathematics from the University of Texas at Austin. He served on the editorial boards for a number of major national and international scientific journals. Ewing held the Mobil Technology Company Chair in Computational Science, TEES Distinguished Research Chair, and served as Distinguished Professor of Mathematics and Applied Mathematics at Texas A&M. He received an honorary doctoral degree from the University of Bergen, Norway and an honorary guest professorship from Shandong University, China. He received the Alexander von Humboldt Research Award from Germany and was elected as a foreign member of the Academia Europaea.

A world-renowned scientist in mathematics, engineering, and computational sciences, Dr. Ewing received widespread recognition for his research on numerical methods for partial differential equations (PDE), preconditioning techniques, adaptive computational methods, and upscaling for fluid flows in porous media. His work focused on the mathematical modeling of multiphase flows and transport in petroleum reservoirs and subsurface aquifers. Over the years, he made profound discoveries and key contributions to his research field and authored or coauthored over 330 publications.

Ewing served as co-principal investigator for the multi-million dollar Grand Challenge Project funded by the Department of Energy, which involved five universities and three national laboratories. He also functioned as co-principal investigator on the Disaster Relief and Emergency Medical Services (DREAMS™) project, with $10 million in annual funding, and the National Science Foundation Information Technology in Science (ITS) Center for Teaching and Learning, a five-year $10 million project.

For many years, in addition to his research activities, Dr. Ewing contributed to advancing education and the scientific community as the Vice President for Research at Texas A&M. In this capacity, he provided leadership and coordinated the developing, implementing, operating, and assessing programs to support creative scholarship, graduate studies, and sponsored research throughout Texas A&M.

With vision and commitment to international education and research, Dr. Ewing led Texas A&M University and the ISC in forging long-term strategic research alliances with many foreign partners including Mexico, China, and Qatar.

In 2003, Texas A&M also opened a branch campus in Doha, Qatar, and Ewing led creating the first two research centers. The centers, which focus on producing and utilizing natural resources and environmental sustainability, are in Doha with partner labs in College Station.

Ewing's research leadership reached beyond the university. Ewing served on the Houston Technology Center's, Associated Western Universities', Southwestern Universities Research Association's, and Texas Society for Biomedical Research's board of directors. Prior to his loss, the state also named Dr. Ewing to its Product Development and Small Business Incubator Board.

Dr. Ewing passed away on December 5, 2007 of an apparent heart attack at the age of 61. Many deeply love and miss him.